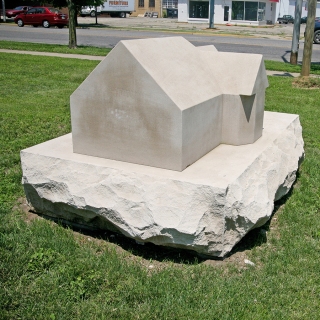 Artist Lauren Ewing’s ongoing studies of architectural typology led her to create this sculpture. What style lasts, and why? The common house type appearing most often in all of the older Terre Haute neighbor-hoods is an “irregularly massed composite cottage,” with multiple gable roofs and an incised porch. This type proliferated because of its ability to adapt, to fit any lot configuration and get natural light into the maximum number of rooms. Most popular between 1890 and 1910, it provided residences for families forming the core of the city’s working population at the turn of the century. Due to their age, the houses are fast disappearing from the cultural landscape.

This house type was adapted for use throughout residential communities in north, south and central Terre Haute. It was given a configuration unique enough to be referred to as the Terre Haute House type. Many examples are found in all of Terre Haute’s oldest neighborhoods.

Oolitic limestone, a unique Indiana natural resource, has been quarried in south-central Indiana since 1880 and is one of the most widely used stones in the world. Indiana has produced more limestone than any other state in the United States. The use of this material is a tribute to another important aspect of Indiana’s living history.

Art Spaces is proud to have several sculptures in Terre Haute Parks. Our parks are one of the things that make Terre Haute a great place to live. Let's help the Parks Department as they plan for their next 5 years. Fill out this survey, and pass it on to all of your friends and co-workers. https://purdue.ca1.qualtrics.com/jfe/form/SV_cBCissC9SSdR90p
This lively graphic by Julia Reich shows the great energy in the room as people discussed ways to make the Turn to the River project area welcoming, comfortable and safe for EVERYONE, while helping to make us all more healthy. Thanks everyone for your terrific input - Art Spaces relies on community input to provide public places that are truly welcoming!
%d bloggers like this: