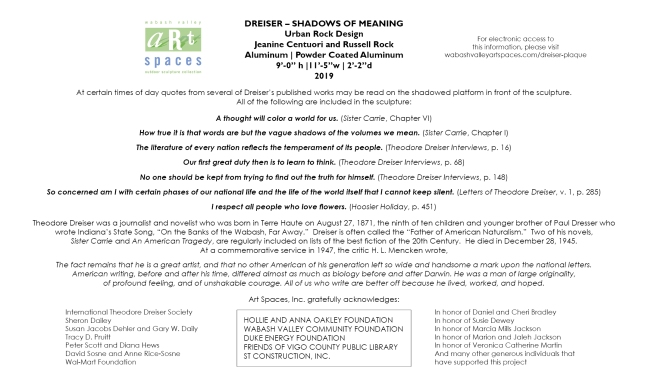 The plaque above reads:

At certain times of day quotes from several of Dreiser’s published works may be read on the shadowed platform in front of the sculpture. All of the following are included in the sculpture:

A thought will color a world for us. (Sister Carrie, Chapter VI)

How true it is that words are but the vague shadows of the volumes we mean. (Sister Carrie, Chapter I)

The literature of every nation reflects the temperament of its people. (Theodore Dreiser Interviews, p. 16)

Our first great duty then is to learn to think. (Theodore Dreiser Interviews, p. 68)

No one should be kept from trying to find out the truth for himself. (Theodore Dreiser Interviews, p. 148)

So concerned am I with certain phases of our national life and the life of the world itself that I cannot keep silent. (Letters of Theodore Dreiser, v. 1, p. 285)

I respect all people who love flowers. (Hoosier Holiday, p. 451)

Theodore Dreiser was a journalist and novelist who was born in Terre Haute on August 27, 1871, the ninth of ten children and younger brother of Paul Dresser who wrote Indiana’s State Song, “On the Banks of the Wabash, Far Away.” Dreiser is often called the “Father of American Naturalism.” Two of his novels, Sister Carrie and An American Tragedy, are regularly included on lists of the best fiction of the 20th Century. He died in December 28, 1945. At a commemorative service in 1947, the critic H. L. Mencken wrote,

The fact remains that he is a great artist, and that no other American of his generation left so wide and handsome a mark upon the national letters. American writing, before and after his time, differed almost as much as biology before and after Darwin. He was a man of large originality, of profound feeling, and of unshakable courage. All of us who write are better off because he lived, worked, and hoped.